"My" homeless man hasn't been around at all this week! This worries me because the weather has been unseasonably warm and dry, so it can't be the intemperate clime that's forced him away from his spot in front of McDonald's.

But, as is the ca 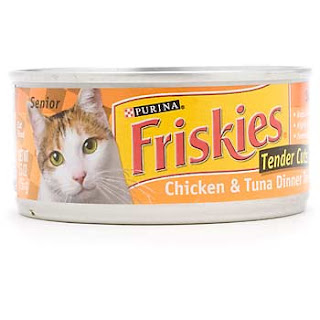 se in any big city, someone else in need is right there to take his place. This time it's Molly, a primarily white cat with gray ears and a gray tail who spends her days being clutched to the chest of either of her people -- a couple in their 20s whose sign says they are homeless due to hard times. Tuesday, when I first saw Molly, I gave her people the change I had reserved for my homeless man. Today I stopped at Walgreen's and picked up a can of Friskies for her. I spoke to her male-type person for a moment (that's how I learned her name), gave him the chicken & tuna and a dollar and told Molly lunch was on me.

Dogs and cats and kids tug at my heartstrings because they are like corks on the water, helplessly going only where the waves and we take them. Also, my Tommy was a big white cat with one black ear and a black tail, and I consider Molly's lunch a tribute to him, for he was a really great cat.
Posted by The Gal Herself at 4/16/2010 03:13:00 PM