Ooooh! I haven't seen this movie since I was a girl! 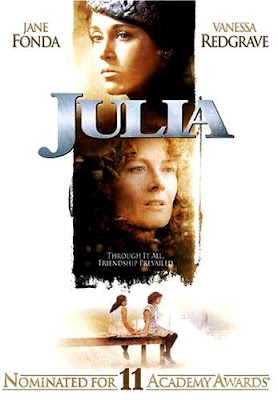 Julia, starring Jane Fonda and Vanessa Redgrave and Jason Robards, was a huge deal to me when it first came out in the 1970s. I happened to be in my Lillian Hellman period -- I read everything of hers I could get my hands on. "Julia" is a chapter of Pentimento, one of Hellman's memoirs. Robards played Dashiell Hammett, Hellman's lover and mentor and a great man of letters his damn self. And Redgrave was Julia, Hellman's girlfriend friend/idol/conscience. The "bad guys" in this story are as villainous as they come -- Hitler and Mussolini.

At the beginning of tonight's TCM broadcast, Robert Osborne said Julia marked Meryl Streep's movie debut in a bit part. I'll have to look for her.

I love Oscar time because movies like this one get dusted off, and I get to fall in love with them again!

Or not. This just in: I dozed off before the end. It seemed far more pretentious to me this time around. Maybe I should have just left it as I remembered it. "Pentimento."

Though I did see an impossibly young Meryl Streep in a scene with Fonda/Hellman, playing a shallow socialite.