A rather more Christmasy memory of 2009

My uncle is a complicated man. Until about 20 years ago he was driven by success and money. He believed (perhaps still believes) that success and money give him power, gain him acceptance, if not love. This attitude makes him a bit of a dick at times. His slow, slow but inexorable deterioration due to Parkinson's has not improved his disposition or his outlook.

To tell our story, his and mine, two things must be included: (1) His life was shaped in large part by his service in Viet Nam and (2) while he may have been unpleasant to others in my family, I have never had a gripe about how he has treated me personally. I have many girlhood recollections of his kindness and fun we had together, and I keep those always at the forefront of my memory when I deal with the sick, grumpy, difficult old man he has become.

Which is why chatting with him last night (Christmas Eve) was so touching.

He doesn't join us for family holiday celebrations anymore. His days are often bad ones and he isn't up 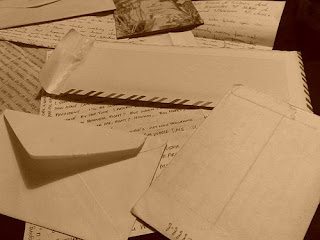 to having many people around. But he sent a gift for me to over to my mom's house, and he called to be on the phone with me when I opened it. The package mostly contained old family -- OK, old family pet -- photos. But there were also a pair of old notes, one from 1994 and one from 2003, that I sent him. I was thanking him for introducing me to the Beatles back in February 1964. I was very moved that he had kept them all these years, that he had moved them with him from house to house, and saddened that he returned them to me. It was his way of letting me know he appreciates me, and of making sure they aren't disposed of when he dies.

I was sad to learn, too, that he didn't understand my Christmas gift to him. Enclosed with his card were a letter from Operation Shoebox and a list of goodies donated to soldiers in his name. He said he saw "something" in the card but couldn't really "follow" it.

Oh well, I guess it doesn't matter, really. He seemed just as happy that I sent him a card, and two soldiers in Afghanistan had a happier holiday because of the stuff they received.
Posted by The Gal Herself at 12/25/2009 01:46:00 PM