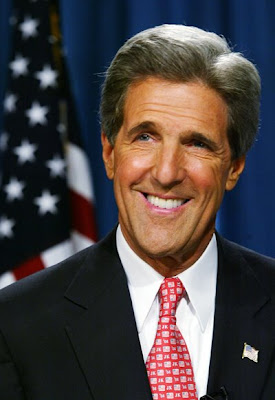 Senator Kerry appeared on Meet the Press, acting as an Obama surrogate. He praised Obama's talent and ability to inspire the electorate. I was impressed. If I were him, I'd be grumbling about all the Obama donors and saying, "Where were you four years ago? If you had supported me with this much enthusiasm, I could have helped you avoid this mess!" But I cannot imagine John Kerry saying that. To improbably borrow from Peggy Noonan's assessment of Ronald Reagain, Senator Kerry is "hardwired for courtesy."

On a separate note, I am saddened to learn of the death of my "other" senator's daughter, Chris Durbin. She was only 40. As he approaches a landslide reelection to his third term on Tuesday, I hope Senator Durbin can take solace that his daughter is at peace after enduring a long battle with heart disease.
Posted by The Gal Herself at 11/02/2008 10:39:00 AM