A toast to a versatile artist 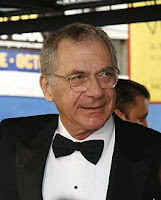 Sydney Pollack died today, reportedly of stomach cancer. He was 73. I loved his work.

He directed my all-time favorite movie, The Way We Were. His work behind the camera also included big hits like Tootsie and the Oscar-winning Out of Africa. For someone as rough and tough as Pollack seemed, he worked beautifully with actresses as formidable and diverse as Fonda and Streisand and Dunaway and Nicole Kidman.

If Sydney Pollack was involved, it was always a quality piece of work. Recount, the HBO movie about Florida in 2000 that just premiered this week, was produced by Pollack, as was Michael Clayton.

He was a compelling presence onscreen, too, playing Clooney's challenging and ethically-challenged boss in Michael Clayton and Will's warm and wonderful (but still flawed) dad on Will and Grace.

Even more impressive than his filmwork is the fact that Mr. Pollack is survived by his wife, Claire, whom he married in 1958. A half-century together. That's an almost impossible feat, even for couples who aren't in Hollywood.