What I learned while hanging around in a robe 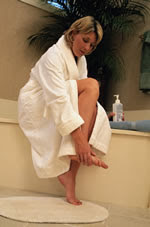 There's something healing about going off by myself. In this suburb of Atlanta, where the only decisions I had to wrestle with were whether or not to have my eyebrows shaped (I chickened out) and whether I wanted the beef bourguignon or the salmon steak (the beef was just sooo fabulous!), I was able to turn off the noise. To think about my life and how I felt about things. To give myself a little direction.

My "living piece of shit" ex-boyfriend (as he was recently christened by my oldest friend) was on my mind again as he hasn't been in years. Most vividly when I was having a neck and shoulder massage by a man. There was something chilling and awful about a man's large hands on my neck from behind. Deja terror. But good actually came of this. I reminded myself that he's only top of mind because last week he tried to reinsert himself into my life. I've decided that, "I hear him knocking, but he can't come in." Therefore he'll fade from my consciousness again. It's up to me now. I let him ruin my life once. I won't let him do so again. I just won't. And this isn't "fake it until you make it" talk. I believe every word I just wrote.

The economy is on my mind, just as it is on everyone else's. Even in what should be "the happiest place on earth." While getting an absolutely wonderful foot massage, I heard one of the Chateau Elan nail techs announce that she was knocking off early because her hours had been cut. The limo driver who ferried me between airport and spa was new to livery -- he ran a horse farm nearby and has sold off most of the horses on his way to retirement, but right now he can't get the price for his land he knows it's worth. So he spends his mornings making a few extra bucks and sharing his observations on life from behind the wheel of gray Mercedes, waiting for the real estate market to change.

I realized I feel vulnerable, too, because I have too much credit card debt. Yes, I have almost 8 months' worth of expenses tucked away and yes, I know that's a laudable nest egg. But that nest egg would last just that much longer in case of a layoff if I owed less to Citibank. Reducing my debt is not only the smart thing to do, it's the comfortable thing to do. I'm a nice old gal. I deserve to feel good about my situation. So I'm going to curb the incidental, silly spending. Not vacations like this one -- I need and deserve these. But really, NO MORE PURSES for a while! And no more books until I dent this prodigious TBR pile. I'm going to have to watch what else I piss my money away on each week. I know there must be ways to economize. I'll feel stronger and safer for doing it.

One of the best things about a vacation spent mostly in a spa-supplied robe is that I have precious little laundry to do. So I have many time-consuming tasks that simply MUST be done before Monday, so I can continue decompressing -- and maintaining this feeling of zen -- until I have to return to work and real life.
Posted by The Gal Herself at 3/28/2008 06:47:00 PM