Lord Almighty! I really do love The King.

I sang almost every moment I was in Memphis. No shit. I sing badly, so it was done softly. And in public, it was mostly absent minded, crooning along with the Elvis songs that are piped in everywhere. Really, even at the airport.

Because here's the thing ... yes, it's easy to make fun of the jumpsuits and massive, rhinestone belt buckles. And the peanut butter and banana sandwiches. And the creepy monkeys I just discovered. But he was extravagantly talented and cast a huge shadow over American culture. I was moved by how much he did in his 42 years, and how good he could be (when he wasn't phoning it in).

As a movie lover, I appreciate three of Elvis' early, pre-Army movies. His favorite, I learned, was King Creole. But mine remains Jailhouse Rock. So I was completely tickled to see Elvis' own well-worn copy of the shooting script. 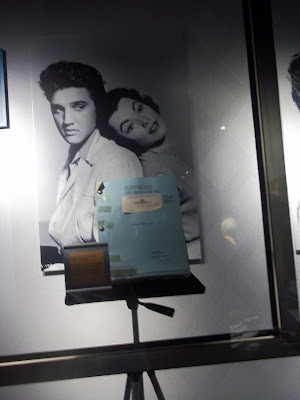