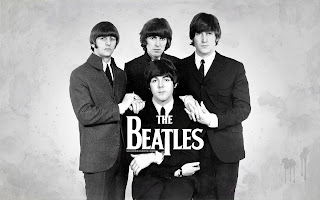 But most of all, we talked about The Beatles. Our favorite albums (he votes for Abbey Road, I'm White Album all the way). What we'd ask Sir Paul, if we could (he wants to know if the break up was really inevitable; I'd ask which of John's songs is his favorite). The Lads dominated the two hours we spent together.

My nephew was born in this millennium. The Beatles broke up in 1970. Two members of the group are dead. The passion he and his classmates feel for the Fab Four is really astonishing.

I work in a very busy part of downtown Chicago. Lately one of the ubiquitous sidewalk musicians has been playing the xylophone. Every time I pass, he's playing a Beatles tune. (It was "Penny Lane" on Friday afternoon.) He's doing this to get tips from business people and tourists alike. Clearly he chooses these tunes because they are fun to play and familiar to people from all walks of life, from all over the country and all over the world.

If I could ask him a second question, it would be, "Do you feel the love?" Does he understand how much he means to everyone from millennials to boomers?

I think it must be really lovely to be Paul, and know far his reach is, how much joy he's brought.