THIS JUST IN!!! California's parole board denies parole for convicted killer Betty Broderick. "She was totally not remorseful, didn't even try," San Diego Assistant District Attorney Sachs said. Broderick won't be eligible for another parole hearing for 15 years -- the maximum time the law allows, he added. 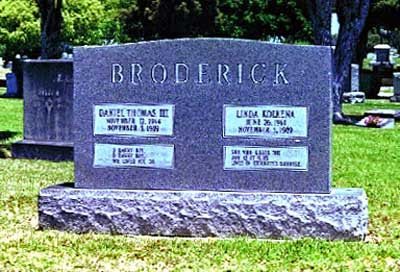 So Betty Broderick wants to be released from prison. Well, as my grandma would say, "in hell, they want ice water."

Betty Broderick shot her ex-husband and his much-younger, second wife as they slept. Five times. Pre-dawn. In their own bed. In their own home. That she snuck into, using a key stolen from their eldest daughter.

Her defense? They drove her to it. By sleeping in their own bed in their own home before sunrise on a Sunday morning. I can see why she felt threatened.

I hate this bitch. I admit it. She tries to present herself as a cause celebre, a feminist hero, because her husband "abused" her -- first by cheating on her after years of marriage (during many of which she supported him, admitted) and then leaving her. She claims he used all of his considerable prestige in the legal community to ruin her financially.

Betty abandoned their children on his porch. Betty drove her SUV into their front door. Betty entered their home uninvited when they weren't home and smashed a chocolate cake on their bedroom walls. Betty left profane and harassing answering machine messages for their then-young children to hear.

She ignored every restraining order against her because rules don't apply to sociopaths like Betty. She hired and fired two separate divorce attorneys because she was so difficult to work with, then whined because she was unable to find legitimate counsel to defend her against her powerful lawyer husband.

Yet she received maintenance from her husband, even though he had custody of the children: $9,000/month, which today would be approx. $15,000/month. He also handled many of the expenses associated with her home. With that kind of alimony coming in, she never had to work after her divorce. Which is good, because a job would have cut into her time at the firing range, where she honed the skills required to shoot two sleeping people. I guess unmoving targets can present a challenge.

Her marriage didn't work out. The husband she supported for years and years dumped her for another woman, just as the gravy train pulled into the station. It's sad, it's unfair, but it happens all the time. And yet somehow, other first wives manage to not commit double homicide.

A few statistics about real domestic abuse and divorce:

• Approximately 1.3 million women and 835,000 men are physically assaulted by an intimate partner annually in the United States. (American Bar Association)

• Many single mothers slide below the poverty line after divorce because while the ex-husband's income usually drops about 10% post-divorce, the ex-wife's falls as much as 30%.

The 1.3 million women who are abused each year, those who flee their husbands with children in tow, who trade violence for peace ... and poverty -- Betty Broderick is an insult to poor gallant women.

Not to mention to those who loved Dan and Linda Broderick, whose tombstone I include here. Kindly remember that this is where they have been while Betty answers fan mail from angry divorcees and gives jailhouse interviews. These are the victims. Not that attention junkie in San Diego.

For a more balanced account of Betty's pathetic saga, visit CNN.com.
I admit the old-school feminist in me cannot STAND her!