It was on again this morning 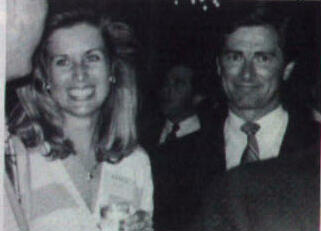 MSNBC reran their documentary on Betty Broderick. That dame still makes my blood boil, even after all these years.

For the uninitiated, Betty is serving time for killing her husband and his new wife. Before dawn on a Sunday morning. As they slept. In their own bed. Betty stole her oldest daughter's keys to Daddy's house, went up the stairs, and plugged them. She then ripped the phone out of her bleeding ex's hand so he couldn't call for help.

Betty likes to portray herself as a feminist icon of some sort. Her husband left her for a younger woman. She felt that she was "gypped" in the settlement. She was upset that she had worked him through college and supported him through the lean years. She was angry, angry, angry.

Poor Betty. Life sucks, don't it? What she fails to mention is that she abandoned their four children on her exhusband's doorstep one night when he wasn't even there. That's perilous, bad mothering even in the best neighborhoods. It was then that he took custody. Even after their separation he continued to pay her credit card bills. For five years (the time it took Dan to be legally rid of this shrew), she drove her Suburban through his front door, left obscene messages on his answering machine (which she knew would be heard by her young sons), broke into their home and vandalized it, as they planned their wedding she stole the bride's guest list from a desk drawer.

Ah yes, the bride. That was Linda Kolkena. After only 7 months of marriage, she was murdered in cold blood while she slept in her own bed. She was only 28 years old. I've included her photos here, not Betty's, because Linda is the one who lost her life.

We live in a nation of laws. Betty broke them. Lots of them. She is a murderer. She killed the father of her children and their new stepmother. She left those children with no one because she couldn't control her rage. And somehow she thinks we women should support her.

There are mothers right here in the Chicagoland area who are raising children without the financial support of the fathers. These women not only don't get $9,000 each month in child support, they often find themselves at the business end of a fist. These women deserve my compassion and support. Not that blowzy old narcissist in California who is right where she should be, behind bars.