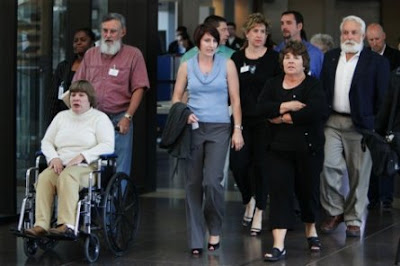 Chicago is a great place to live. But in addition to the parks and museums and restaurants and theaters, we also have a very dark criminal past that goes well beyond Al Capone and the memorable way he chose to celebrate Valentine's Day. Leopold and Loeb, Richard Speck, John Gacy and Tylenol Killer all spring to mind.

It occurs to me that we remember the killers but not their victims. So today, as the news breaks about a conviction in the second Brown's Chicken murder trial, I choose to show a photo of the victims' families as the exited the court house.

Back in 1993, two men (kids, really) walked into a Brown's Chicken restaurant and, at closing time, herded seven workers into a walk-in refrigerator and alternately shot and stabbed them. The crime went unsolved for almost a decade. Then, in 2002, one of the killers' girlfriends had to share her horrible secret about her fella. When the case was reopened, it was discovered that one of the forward-thinking 1993 crime-scene techs saved a piece of half-eaten chicken. Technology had evolved to the point that DNA on that years-old wing could be compared to and matched with the boyfriend's. And finally, one of the creepier unsolved crimes was on its way to being solved.

It was an ugly, cowardly crime. No motive, these two turds just wanted to see if they could get away with a mass murder. I am glad they are finally behind bars and no longer wandering among decent people. I am glad these family members got to see justice done.
Posted by The Gal Herself at 9/29/2009 05:05:00 PM