I know what her public reaction would be 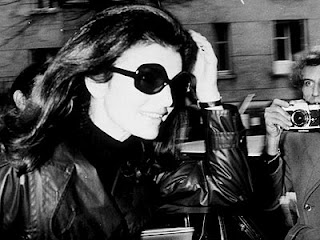 Without breaking her stride, she'd simply say, "No comment." Or maybe no one would have the cajones to ask her about this to her face. After all, the paparazzi who swarmed her only ever got photos, never answers. (WWJD -- What Would Jackie Do? -- is a game I play often because I remain in awe of her strength, composure, and ability to stylishly rise above even the worst situations.)

PORTLAND, Ore. — Police in Oregon say they’ve found graphic child pornography at the home of the half-brother to the late Jacqueline Kennedy Onassis.

The search at the Ashland home of 62-year-old James Auchincloss occurred in October, according to the Ashland Daily Tidings, which first reported the story. No charges have been filed.

Calls by The Associated Press to Auchincloss were not returned.

The newspaper said Auchincloss, who has lived in Ashland since 1995 and serves on the board of Oregon Stage Works, declined to comment on what police found at his home, saying that it was “a matter for the courts.”