I must be a lady of letters, part 1

There's a bookstore in Key West run by a dear friend of my friends. Before she took over the bookstore, she was a bartender with Reg. Then, when she was just getting started as an entrepreneur and Henry was unemployed, she gave him a job in the bookstore, shelving volumes and working the register.

I know how much she means to them, so when I saw that the store sustained considerable damaged during Hurricane Irma, I called and bought a $15 gift certificate for Henry. That was September and his birthday isn't until December, but September is when she was cash-strapped. She promised to keep it in the register until I came down for Henry's birthday/Christmas.

Unbeknownst to me, Henry was thinking the very same thing, and I got a $100 gift certificate for my birthday from the same bookstore. While the dollar amount made my eyes pop, it's really not as extravagant as it looks. The bookstore has a used book section, and now that Henry works at the local library, he keeps it stocked for his friend. He rescues the books that the library removes from the shelves, buying them for 25¢ or 50¢ each.* She insists on paying him, just as she would anyone else she buys used books from. Since Irma, he has collected a lot of store credit, and rather than having her open the register and pay him, he gave it to me as a gift certificate.

And so, on my first day in Key West, we had a shopping spree. Here's my $100 haul. It was a delight to walk through the shelves and say, "Wrap it up! I'll take it!" 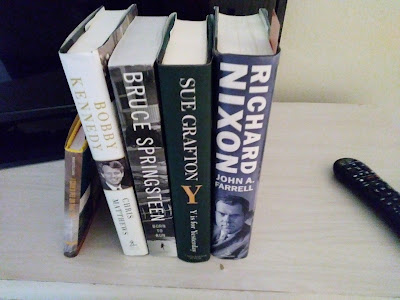 Henry used his birthday present/gift certificate from me on a self-help book for his friend, Patrick. A head waiter at a popular restaurant in Maine, Patrick knows he won't make much money at home during these exceptionally snowy months and took a leave of absence. He's staying with Henry and Reg for the winter and working at a Key West restaurant because he is, in his own words, "poor as a church mouse." They'd agreed not to exchange gifts because the whole point of this trip was for Patrick to make money. But, since it was purchased with a gift certificate, Henry didn't think Patrick would mind. (And who doesn't want a gift under the tree?)

*I believe that's what he said he paid. I don't remember exactly (I'm so bad with numbers). I just recall it was a small amount.