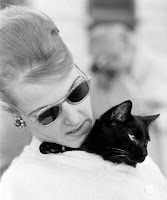 … that as much as I love my cats, they're still just cats.

A couple months ago, the vet changed their diets. Since then I have noticed less ... um ... "solid waste" in the litter boxes. No one is acting as though they're uncomfortable, but I want to nip any gastrointestinal problems in the bud with OTC kitty laxative. There are a couple brands available, both similar: a petroleum jelly base with mineral oil and caramel coloring/flavoring that appeals to felines. You administer it by putting a dab on their paws and they lick it off.

Except for my three.

All three responded well to the smell of the cat lax on my finger. Then, when I left the dab on their front paws, they wondered why it was no longer on my finger. And wondered and wondered what happened to it. Was it on the carpet? No? Oh, well. Then they gave up and went about their business.

Charlotte finally found it first licked it off rather completely. Next Reynaldo figured it out. Joe, by far the sweetest but definitely the least likely to get into Mensa, discovered it right around eventually.