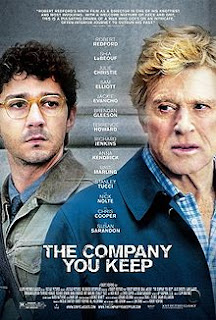 The Company You Keep is a fascinating failure that just misses being good.

All the performances are good. It was great to see Redford, Nick Nolte and the amazing Julie Christie doing what they do best. I wish they all worked more.

But Redford, Nolte and Christie are all frankly, unapologetically, over 70. Nothing wrong with that. But it would make them all over 40 when the events that start the ball rolling take place. Without giving too much away, they were involved in robbing a bank to fund their underground radical activities and bring down evil corporations. 40 is TOO OLD for that kind of behavior. And, considering the way biology works, they were too old for one of the subplots.

Why didn't Redford (who also directed) set the initial bank robbery in the early 1970s, circa Patty Hearst and the SLA? That would have been easier to accept. And the little girl who plays his daughter? She's too freaking young. What is this 70 something man doing with an 11-year-old daughter? It's distracting. Couldn't they have reworked the plot to make her his granddaughter?

Also, with Boston on my mind, it's hard for me to romanticize political terrorism. It doesn't matter to me if innocent lives are lost in support of radical Islam (Boston) or a gun-hoarding religious freak (Oklahoma City) or the end of corporate greed (this movie). It's wrong, wrong, wrong. Americans should never turn on other Americans like this. We have a system. Work within it.