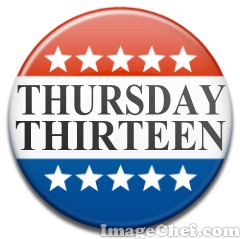 I'm feeling very Presidential these days. So here are some little known facts about our last 13 Commanders in Chief. (Thanks to Kwizgiver for the inspiration.)

1) When Barack Obama was a student at Columbia University, his nickname was "Barry."

2) As a little boy, George W. Bush took the role of family "clown" to raise his parents' spirits after the death of his younger sister Robin, who passed away at the tender age of 4 of leukemia.

4) Though he later developed a passion for foreign affairs, George Herbert Walker Bush earned a degree in economics from Yale.

5) Ronald Reagan referred to himself as "an indifferent student" until he discovered dramatics at Eureka College.

7) A gifted athlete, Gerald Ford turned down offers from both the Detroit Lions and the Green Bay Packers.

8) Richard Nixon was very good at the piano and encouraged guests to sing along as he played.

9) While in college, Lyndon Johnson earned glowing references as a student teacher.

10) John Kennedy was the father of the last baby born to a sitting President, but Patrick Bouvier Kennedy lived only a few days and never made it to the White House.

11) At West Point, Dwight Eisenhower was reprimanded for smoking.

12) Harry Truman was a self conscious child who believed wearing glasses set him apart from his classmates.

13) Franklin Roosevelt passed the bar and practiced law briefly for a prestigious New York law firm, but he never enjoyed being an attorney.