Now this makes me happy!

Robert Redford to throw out first pitch in Chicago 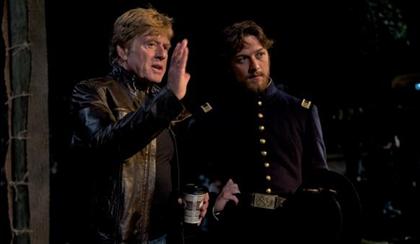 Robert Redford directs James McAvoy on the set of 'The Conspirator.'
CAPTION
By Claudette Barius, The American Film Company
We're guessing Robert Redford, who had a college baseball scholarship before turning to film, will go with a fastball as he throws out the first pitch next week at Chicago's Wrigley Field on opening day, April 1, when the Cubs take on the Pittsburgh Pirates.

Redford, 74, will be taking a break from his work on The Conspirator, which opens April 15, to make the MLB appearance.

Starring James McAvoy, Robin Wright, Kevin Kline, Evan Rachel Wood, Danny Huston, Justin Long, Tom Wilkinson and Alexis Bleidel, The Conspirator tells the story of what happened after Abraham Lincoln's assassination, as seven men and one woman are arrested and charged with conspiring to kill the president, the vice president, and the secretary of state. The lone woman charged, Mary Surratt (Robin Wright), owns a boarding house where John Wilkes Booth and others met and planned the simultaneous attacks.

The film is produced by Joe Ricketts' The American Film Company. The Ricketts family owns the Chicago Cubs, and Wrigley Field played a pivotal role in Redford's film The Natural.