The pitchers are doing their part 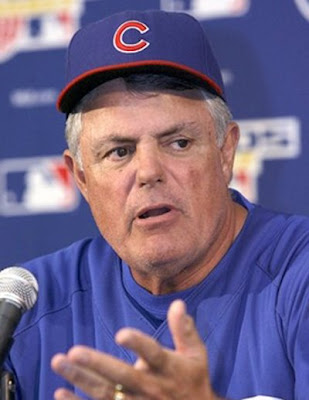 The Cub bats remain silent! I am trying to keep my cool and not start freaking out. But it's hard. Zambrano, Wells, Lilly and now Hardin have all turned in noteworthy performances, but they have received little or no support from the offense.

Fortunately, there's still Lou. I love watching him face the press, never more so than after a heartbreaker like today's 2-0 loss to the Twins. He's not happy, certainly. He looks weary, but not enraged. No excuses. No scape goating. He says we just need to hit the ball harder and more often. It's a 160+ game season, it's only June, and Lou's not throwing in the towel.

In Lou I trust.

Besides, last year we reliably won game after game after game in the regular season and completely fell apart in the play offs. Perhaps Lou is just implementing his secret plan for reversing that equation.
Posted by The Gal Herself at 6/13/2009 03:45:00 PM