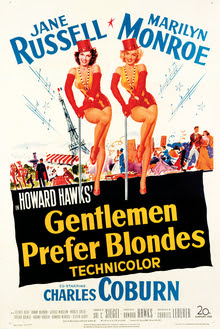 Last year, at the TCM Classic Film Festival, I missed seeing Gentlemen Prefer Blondes on the big screen. There was a conflict. Angie Dickinson was appearing to discuss Ocean's 11 at a special screening by the pool. It was the first night of the festival! How could I pass on that live and in-person glamor? Still, I wish I'd seen Marilyn in glorious Technicolor. I mean, she's MARILYN.

Has any star ever shined brighter than Marilyn? Has any film icon been open to more interpretation? And this is such a sweet, albeit dated, film. A decent little musical.

I felt so much when I watched it this afternoon. First of all, I was acutely aware of where it falls in Marilyn's film canon. This was one of three major movies Marilyn made in 1953, the year she became a star. She had worked so hard for it and now it was hers. She was 27 and dating Joe DiMaggio. She would probably never be this happy again.

After 9 years, 8 films and two divorces, she would be dead. So when I watch her in this movie, I wish I could freeze her here. Or rewind her life story, letting her make better choices. Giving her a chance. That's the thing about Marilyn: We all want to rescue her.

Jane Russell is better than I remembered. This is important because, watched in 2020, this movie is as much about girl power as it is about sex. For the movie to work as well as it does, we need the two main characters to be in balance. We have to like both of them and believe they like one another. We do. As sublimely silly yet focused as Marilyn is, Jane is down-to-earth yet idealistic. And yes, they love each other as good girlfriends should.

The movie has some nice musical numbers -- "When Love Goes Wrong, Nothing Goes Right," "Isn't Anyone Here for Love?" -- and a true classic in "Diamonds are a Girl's Best Friend." But today, my favorite moment was when the two little girls from Little Rock reprise their opening number as they walk down the aisle, each to the man of her dreams. And they all lived happily ever after!