Today was the Illinois primary 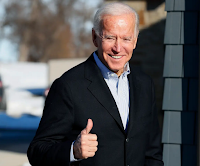 Joe Biden got 60% of the vote here, doing better against Bernie Sanders than Hillary Clinton did. I think a lot of it has to do with the virus.

•  College students are away from campus and that hurts Bernie's GOTV efforts.

•  Voters (like me) want someone with a steady hand and empathy at the wheel during a crisis. That's old Joe, not Bernie.

And certainly not the current occupant of the White House, who was downplaying this when he should have been acting on it. Example: on January 22, in Davos, Donald Trump told CNBC that this problem was “totally under control. It’s one person coming in from China, and we have it under control. It’s going to be just fine." Really? Then why can't I sit in a booth at my coffee shop and enjoy a burger? Why can't I go into the office? Why can't I find Purell on any store shelves? Our economy doesn't look so solid now, does it, Mr. President? (Here's the full interview, lest you think I took it out of context.)