About The Birthday Boy

In trying not to freak out about this week's travels, I'm concentrating on the destination. I like saying I'm spending Christmas in the Keys because it's true and I like the alliteration. But I'm really arriving on the 22nd so I can celebrate Henry's birthday with him. 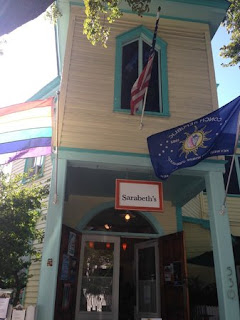 We'll be having dinner at Sarabeth's, one of his favorite spots. We had dinner that together last year on Christmas Eve, but I was already starting to get sick and remember little of the cuisine. At that point we didn't know how ill I really was, and Henry felt bad that I didn't love the restaurant he chose. This year I'm celebrating him by showing him it was my gut, not the menu, that had me so meh about this local gem he wanted to share with me.

Dinner's gonna be expensive, so his gift itself can't be. But that doesn't mean it wasn't carefully considered. I'm wrapping a set of Kikkerland Flasher Bike Lights for him. There's a steady pale light for his handlebars and a flashing red one to attach to his seat, facing behind him. These lights are tiny and will be easy to slip into his ubiquitous backpack. He rides all the time, and when his regular lights go out, he can slip these on and still pedal safely.