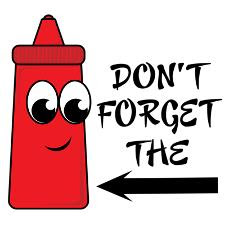 This afternoon, my nephew and I celebrated his 12th birthday. The highlight was the ketchup t-shirt/cap I gave him, perfect for the young man who has been known to just lick the red stuff on the plate when he thinks he can get away with it. He can't wait to wear them to school tomorrow.

I also got him the workings for a music box ("Yellow Submarine") so he and his dad could build something in the workshop to go around it, a comb that looks like a dinosaur fossil, and a Toys R Us gift card (he's saving for a new Nintendo 3DS). He was happy and polite and excited and I enjoyed the time with him enormously.

I was especially touched by how happy he was to hear from his sister, now away at college in Michigan. The call was less than 3 minutes long, but he wasn't expecting one at all since he'd already received her gift in the mail. When I pointed out to him that she probably had to make two calls to find him -- the first likely being a call to the landline at home -- he was even happier.

I'm proud of her that she remembered to call him on his special day, too.

My happiness is only muted by how badly I needed a nap once the party was over. I'm getting very frustrated with my recovery!
Posted by The Gal Herself at 10/02/2011 08:20:00 PM