Perhaps I should feel bad, but I don't 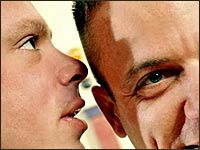 Instead I feel quite important.

The two freelancers my boss brought in were huddled together. One began, "She just has a way ..." Then he saw it was The Gal Herself on the approach and lowered his voice to inaudible. I like to think he ended his assessment with, "… a way of busting me when I get all pretentious and take my sweet time on a project, just to run out the clock and make myself an extra buck or two."