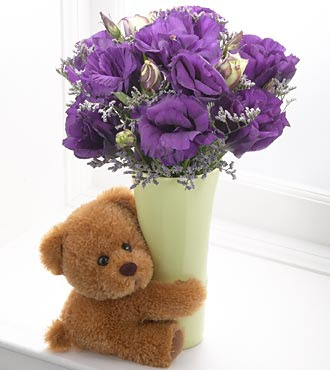 Yesterday my oldest friend checked herself into the hospital. Her tummy trouble was so severe it frightened her. This morning they did laparoscopic surgery on her to remedy a clogged duct between her liver and her gall bladder -- at least I think that's what the nurse told me. The nurse didn't seem to think it was very serious, but then, it wasn't the nurse who was having the surgery.

I called after her surgery but my friend was still sleeping it off. Her son was there with her and said she was doing fine. I wanted her to know I'd been thinking of her so I went to FTD.com and took advantage of their "same day delivery" option. Look what I was able to get her! Who wouldn't be happy to get a teddy "bear hug." I know it made it to the hospital, and maybe even to her room, before she woke up.
Posted by The Gal Herself at 6/19/2009 09:46:00 PM