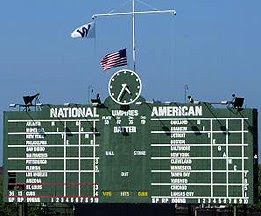 Kwizgiver was interviewed by one of her blog buddies, I thought I'd try it too!

Five questions from Kwizgiver
to The Gal Herself
1. There's a totally complete media blackout on all baseball coverage. How would you follow the Cubs? This was the easiest of the five. For after each game, an L or (most likely) W pennant flies above the scoreboard and it's easily seen from the el tracks. All I'd have to do is go a little (OK, more like an hour) out of my way to get the final result. And while I was in Wrigleyville, I'd probably get off the train and visit one of the many bars and talk to those who had been at the game. Buy a Cub fan a beer and it's not hard to get his opinion on the Boys in Blue.

2. President Obama would like you to be his advisor for... what? I'd like to be his special envoy to the Hillary Contingent: White women over 50 who make less than $50,000/year. Technically speaking I don't belong to this group, but I very easily could have if I didn't have luck and mentors early in my career. I understand them and their issues. Rahm! Are you out there, Rahm! Please pass this suggestion along to POTUS.

3. If you had to create and market a new holiday, what would it be like, how would it be celebrated, would there be decorations, (etc)? Beatles Day! Yes, I know they're British, but what the hell. It would be the first Monday in April, commemorating the week of April 4, 1964, when the Beatles held all five positions of Billboard's Top. Schoolchildren would hold Beatle assemblies, during which they would perform Beatle songs. TV stations would run A Hard Day's Night and Help! the same way we see It's A Wonderful Life and Rudolph every Christmas. It would customary to display the words, "All You Need Is Love" in windows and on doors. Children are told to be good or ELSE (meaning or else Yoko Ono will visit and terrify you in the night).

5. What would you do if you were given a thousand dollars to perform random acts of kindness? This is such a fun fantasy! I'd take $500 and go grocery shopping -- picking up as many non-perishable "buy one, get one free" items as I could and then take my booty to the food pantry. I'd divvy up $400 among animal shelters, because they suffer mightily as the economy falters. I'd use the last $100 to buy McDonald's and Starbuck's gift cards and distribute them to the homeless I see downtown. It would give them the opportunity to go indoors and buy something warm -- but not liquor or cigarettes.

Want to play too? Here's how:

2. I will respond with five questions chosen just for you. (I get to pick the questions).

3. You will update your blog with the answers to the questions.

4. You will include this explanation and an offer to interview others in the same post.